The week started out as expected I guess, we both took leave and started to pack for the big move..We were excited definitely, of getting our own pad and starting life all over again.

Tuesday, the packers came by and spent about 4 hours packing our lives into 75 cartons (I really recommend engaging the packing services once you’re past your twenties! Do your back a favor and it’ll probably last you longer). We did help them out a little with the clothing so it would probably have saved them another half-an-hour.

Wednesday – The BIG day. The movers came by again and started to load everything onto their truck. Halfway through that, I noticed I just missed a call from the school. Called back and realized they already got in touch with my parents and they were going to pick him up as he had a fever. It’s been about a week since he wasn’t feeling too good (it was on and off fever and a dry cough) and so mum brought him to the hospital just to be safe. Turned out to be a good thing as they put him through an X-ray and ran some other tests.

Turns out there is an infection of sorts in the lung and they recommended to ward him so they could monitor him and administer a direct drip for the antibiotics which would be more effective than oral medication.

So after spending a day moving and unpacking stuff, we had to start a shift system to drop in at the hospital to be with him. Was really tired out by the whole exercise.

The next two days involved rotating shifts at the hospital and meeting all sorts of vendors popping in to the new home to install the fridge, washing machine, furniture, touch up the carpentry, painting etc

Well, the good thing is Je-in finally got discharged this morning. Praise God! The tests came back to confirm he had a bout of mycoplasma pneumonia and needed a two-week course of oral antibiotics. Apparently, the drip they started off with wasn’t the right one once they confirmed the bug.

Some stuff i discovered from the doc – 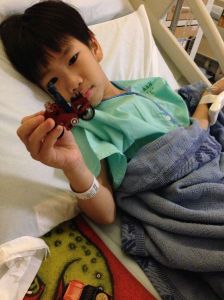 -No need for cough medicines as those are symptoms and will disappear after the infection is treated.

Overall, a very testing week and its not over yet.

View all posts by m3talman